Scarlet Witch is a sorceress and reformed villain who is now a key member of the Avengers.

Her powers manifested at a younger age than anyone realized, as for years she was subconsciously manipulating probability around her.

14
Scarlet Witch warps space and time, imposing a crippling magical pressure and tearing her enemies apart at the seams. Deals 257 damage to the enemy team and stuns a random enemy for 2 turns.

8
Wanda fires an unstable hex bolt at her target. Select one basic tile to destroy it and up to 2 random basic tiles around it, generating AP.

0
(PASSIVE) Scarlet Witch begins a complex ritual, as it grows in power the very fabric of reality seems to writhe. At the beginning of her team's turn, if one does not exist, creates a 4-turn Blue Countdown tile that transforms 2 random adjacent basic tiles to Purple.

Arcane Incantation creates its countdown tile over any basic tile. 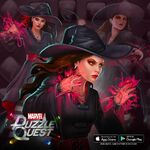