After being attacked and nearly burnt to death by an evil tribe, the Killer-Folk, Devil Dino is rescued by Moon-Boy. The incident activated a powerful mutation in Devil Dino giving him tremendous strength and turning his skin red.

7
Devil Dinosaur grabs the target in his fierce jaws, dealing 439 damage and taking a bite out of a random 2x2 block of tiles. (Destroyed tiles do not deal damage or generate AP.)

First appearance in the game was as a team up on The Hunt event (Common character). 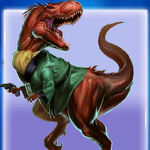