This is a Daily event which features a different 3 star cover reward every day!. Tokens are grouped into 'weeks' of 5 days, with Taco Tokens earned during the week featuring the 5 - 3* heroes. Deadpool's Daily Quest is non-competitive mode with brackets of 10000 people.

HEY! YOU! Marvel Puzzle Quest player! Welcome to Deadpool's Daily Quest, brought to you by me, Deadpool!

This is the place to win ISO-8, a new cover for your 3-Star Characters every day, and delicious, delicious Tacos! Who doesn't love tacos?!

I'm going to keep things interesting with new fights and new rewards, so make sure to come back EVERY DAY! 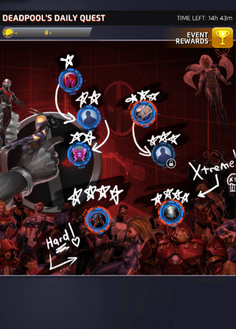 Unlike other events, Taco Tokens are redeemed in the Vault.

Instead of having a typical store page, there will be a "vault" containing 300 items, containing:

This item will then be taken out of the pool.

It can be reset by spending 1000 Hero Points, and will reset each 5 days.

Almost every 3* character was offered as a prize during the first 33 days and, on the 34th day, the prize was Black Panther's second power, very similar to the first prize offered, Black Panther's first power. To that end, each time it appears as the system is cycling through the 3-star characters from the beginning, it is separated into a "Cycle" in this table:

Crash of the Titans HistoryEdit

Retrieved from "https://marvelpuzzlequest.fandom.com/wiki/Deadpool%27s_Daily?oldid=48995"
Community content is available under CC-BY-SA unless otherwise noted.