View source
watch 01:36
We're Getting Mutants in the MCU - The Loop
Do you like this video?
Play Sound

Scott Summers has been through a lot. He was the leader of the X-Men for most of his life. He was host to the Phoenix Force. He ruled the world.

10
Cyclops fires his optic blasts through the battlefield, striking his target and destroying anything in his way. He destroys a random row of tiles and deals 425 damage. Destroyed tiles don't generate AP or deal damage.

7
Cyclops makes a public display of strength to rally young mutants to his side. He converts 4 random Team-Up tiles into basic Red tiles.

13
Scott unleashes a blast that could level a mountain. He deals 822 to the target enemy. If there are more than 9 Red tiles on the board, Scott rips his visor off, releasing his full power. He deals an additional 482 damage but stuns himself for 2 turns while he recovers. 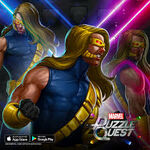