Once again Steve Rogers dons the stars and stripes, prepared to fight those that would subvert liberty and freedom.
To combat evil, Captain America has re-equipped with a shield made of pure energy. Villains are about to find out that an avenging Super Soldier is bad news for business.

19
Captain America courageously rushes to protect the team's flank. Transforms 3 basic chosen tiles into yellow protect tiles, each with a strength of 55.

11
The Captain hurls his trusty shield into battle. Hits the target for 219 damage and transforms a chosen basic tile into a 3 turn red Countdown tile that returns 8 Red AP.

12
Captain America gallantly launches his shield at the enemy. Stuns the target for 2 turns and transforms a chosen basic tile into a 3 turn blue Countdown tile that returns 8 Blue AP. 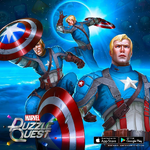